Where was Jesus between His death and resurrection? 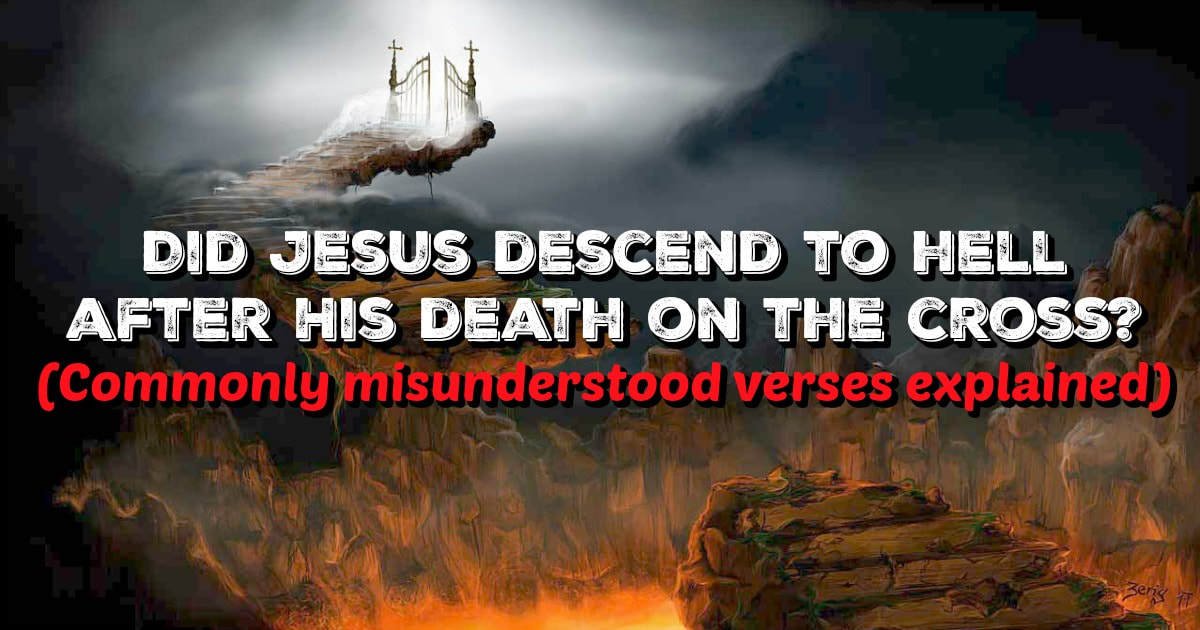 1 Peter 3:18–19 " Christ also suffered once for sins, the righteous for the unrighteous, that he might bring us to God, being put to death in the flesh but made alive in the spirit, in which he went and proclaimed to the spirits in prison” (ESV).

Many of us misunderstood where was Jesus for 3 days between his Death and Resurrection.

This is the key passage in the discussion on where Jesus was for the three days in between His death and resurrection is  The word spirit refers to Christ’s spirit. The contrast is between His flesh and spirit, and not between Christ’s flesh and the Holy Spirit. Christ’s flesh died, but His spirit remained alive. Jesus’ body was in the tomb , but His spirit having departed at His death (Matthew 27:50) was elsewhere for those three days.

Peter gives a little bit of information about what happened in those three days between Jesus’ death and resurrection. The KJV says that Jesus “preached” to the spirits in prison (1 Peter 3:19). The Greek word used simply means that Jesus “heralded a message”; The NIV translates it as “made proclamation.” Jesus suffered and died on the cross, His body being put to death. But His spirit was still alive, and He yielded it to the Father (Luke 23:46). According to Peter, sometime between Jesus’ death and His resurrection Jesus made a special proclamation to some imprisoned spirits.

Where were these imprisoned spirits to whom Jesus spoke between His death and resurrection? Nowhere in the Bible are we told that Jesus visited hell. The idea that Jesus went to hell in order to continue His suffering is unbiblical; His suffering ended when He said, “It is finished” upon the cross (John 19:30).

The New American Standard Bible says that Jesus went to “Hades” (Acts 2:31), but Hades is not hell. Hades is a term that refers, broadly, to the realm of the dead, a temporary place where the dead await resurrection. Revelation 20:11–15 in the NASB and the NIV makes a clear distinction between Hades and the lake of fire. The lake of fire is the permanent, final place of judgment for the lost. Hades is a temporary place for both the lost and the Old Testament saints.

Our Lord Jesus yielded His spirit to the Father, died physically, and entered paradise, as He had promised the thief on the cross (Luke 23:43). At some time between His death and resurrection, Jesus also visited a place where He delivered a message to spirit beings—probably fallen angels (see Jude 1:6); these spirits were probably imprisoned because they were somehow involved in a grievous sin before the flood in Noah’s time (1 Peter 3:20).

Peter does not tell us what Jesus proclaimed to the imprisoned spirits, but it could not have been a message of redemption, since angels cannot be saved (Hebrews 2:16). What Jesus proclaimed was probably a declaration of His victory over Satan and his hosts (1 Peter 3:22; Colossians 2:15).

Ephesians 4:8–10 gives us another clue regarding Jesus’ activities in the three days between His death and resurrection. Quoting Psalm 68:18, Paul says about Christ, “When he ascended on high, he took many captives” (Ephesians 4:8). ESV says that Christ “led a host of captives.” This could refer to an event and no where described in the Scriptures, namely, that Jesus gathered all the redeemed who were in paradise and took them to their permanent dwelling in heaven. That is, after securing their salvation on the cross, Jesus brought Abraham, David, Joshua, Daniel, the beggar Lazarus, the thief on the cross, and everyone else who had previously been justified by faith, and led them from Hades to their new spiritual home.

All of this is to say that the Bible isn’t entirely clear what exactly Christ did for the three days between His death and resurrection. From what we can tell, though, He did two things:He comforted the departed saints and brought them to their eternal home, and He proclaimed His victory over the fallen angels who are kept in prison. What we can know for sure is that Jesus was not giving anyone a second chance for salvation; we face judgment after death (Hebrews 9:27), not a second chance. Also, Jesus was not suffering in hell; His work of redemption was finished on the cross.Amen

Where was Jesus between His death and resurrection?
Choose to Worship instead of worry, which ultimately results in Victory and Blessings
We are free from the power of darkness
Using the right Equipment for our Life (Bible).